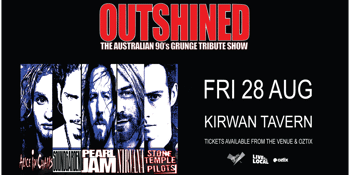 Kirwan Tavern (Kirwan, QLD)
Friday, 28 August 2020 8:00 pm
48 days away
18 Plus
Metal / Hard Rock
Rock
Music
Send this event to
The evolution of OUTSHINED has happened over almost a decade, the project was first considered and discussed by existing band members as far back as 2004. This show has been something that we had always talked about and wanted to do.

Outshined supply venues with a 90+ minute world class LIVE show and performance song-list that is compiled from a massive catalogue of world renowned, internationally acclaimed, multi-award winning albums. From a collection of arguably the most influential bands, artists & acts of THE  GREATEST ERA and decade of music.

• A.K.A - 90’s G R U N G E ...
Since establishing the act (2015/16) OUTSHINED is becoming well renowned for delivering an undeniable power-house stage show that is unrivalled in terms of passion & respect for the bands & music they pay homage to. The undeniable quality production, coupled with musicianship & overall intensity onstage takes the crowd back to the early 90s like it was yesterday. Their show is complimented by an (ever expanding) set-list that is overflowing with a cherry picked selection of 90’s alternative/indie grunge anthems & greatest hits, from the greatest bands that have ever graced a stage, from the 90’s Grunge era...