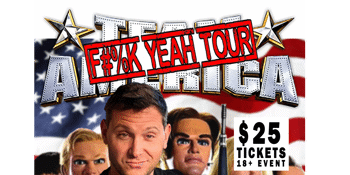 “The ‘Team America Comedy Tour - F#!K YEAH!’ is a special opportunity to see one of the best up and coming natural story telling comedian in Australia before he explodes.”

Jimmy ‘Seppo’ Kuratz  ain’t your typical American “Redneck” comedian; … but he did grow up in the rural state of Iowa, and yes he has used a lawnmower as a transportation ‘ve-hhhicle’.

If you want to know the opinions of a true redneck trailer park American, who grew up with a pet rock as a pet, may not truly understand “P.C” culture, and seriously hates Canadians … then this edgy, introspective, thoughtful, and sometimes rudely over the top comedy show is for you. As offensive as it is inoffensive ‘Seppo’ Kuratz shares stories form his life, his Iowa upbringing and now his new home in Australia.

Having also previously performed in Adelaide, Brisbane and Tasmania, this is Seppo’s first REGONAL West Australian tour, and promises to be one of the best raw comedy experiences of your life.

Why did he move here? Why is he called ‘Seppo’. What does he think of America’s influence on the rest of the world? Well you will have to just join him and the local comedy talent he brings along on The Team America Comedy Tour at town near you July through November.