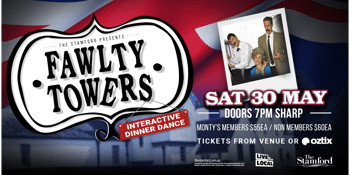 Stamford Inn (Rowville, VIC)
Saturday, 30 May 2020 7:00 pm
2 days away
18 Plus
Music
Rock
Send this event to
Created by John Cleese and Connie Booth the British television sitcom Fawlty Towers, broadcast on BBC in the 1970’s spawned tens of millions of fans worldwide as they fell in love with the cast of Fawlty Towers. This show was ranked first on a list of the 100 Greatest British Television Programs drawn up by the British Film Institute in 2000.

Enjoy your experience even further and dance the night away with the fabulous sounds of The Baby Boomers Duo presenting classic hits from the 50’s, 60’s 70’s & 80’s. With fabulous vocal harmonies & musicianship penetrating their sets of classic hits & fun filled performances, The Baby Boomers Duo revisit musical history with classic tunes & tales from the 50’s, 60’s , 70’s, & 80’s!